CAMPAIGN “RAISE YOUR HEAD!” IN HONOR OF THE 55th ANNIVERSARY OF THE FIRST HUMAN FLIGHT INTO SPACE 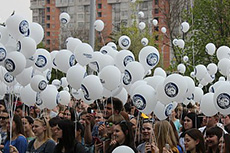 ROSKOSMOS Corporation, with the support of the authorities in dozens of cities, launched the All-Russian campaign “Raise your head!” on April 2, in honor of the 55th anniversary of the first human flight into space.

On the opening day in the town squares, the participants launched into the sky 108 thousand balloons with portraits of the legendary Yuri Gagarin. The symbolic number 108 depict the how many minutes the first space journey lasted.

Also, the installation “Gagarin’s start,” which is a model of the Vostok rocket, was mounted in each participating city for the entire period of the campaign, from April 12 to 27. The best employees of the security group “Rodina” in all regions of Russia were responsible for security at the venue of this large-scale event and guarded the art object. SG “Rodina” successfully coped with the task!

Thousands of people attended the venue during the 15 days of the campaign.  .  Flashmob participants lined up to personally “launch” a rocket by clicking on the “I love space” button with a proud exclamation “Let’s go!”. ROSKOSMOS will summarize the campaign and announce the most active city onApril 27, the last day of the campaign.,

For reference: on April 12, 1961, at 09:07 a.m., from the Baikonur Cosmodrome in the steppe of the Kazakh SSR, a carrier rocket with the Vostok spacecraft was launched, on which 27-year-old Yuri Gagarin, the member of the first cosmonaut detachment, was the first to make his legendary flight into the space. After his successful flight, Yuri Gagarin became known around the world. Yuri Gagarin, pilot-cosmonaut of the Vostok spacecraft-satellite, returned to earth and withstood overloads. The flight lasted 108 minutes.