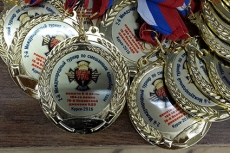 From March 11 to March 13, 2016, Kursk hosted the second International Tournament “Height 776” dedicated to the memory of soldiers of the 6th Airborne Forces company. The tournament brought together about 300 participants from 16 regions of Russia and Belarus.

The organizers of this large-scale event were the All-Russian Organization for the Development of Mixed Martial Arts (MMA), the Alexander Povetkin Foundation «Renaissance,» «the Public Airborne Union named in honor of Hero of Russia Dmitry Zhidkov,» the agency “VITYAZ” and the Security Group “Rodina.” The tournament was supported by the government of the Kursk region.

The Security Group “Rodina” is convinced that such competitions as «Height 776» provide us the opportunity to contribute to the development of society, Russian youth and the country’s future.

The opening ceremony of the tournament was attended by the Champion of the Olympic Games, the World Boxing Champion – Alexander Povetkin; the chairman of the Committee on Sport and Youth Policy of the Kursk Region – Alexander Markovchin’ the president of the MMA Russia – Sergey Evdokimov; representatives of the Security Agencies of Russia and Belarus, war veterans of various years, who in their speech thanked all the athletes who came to pay tribute to the memory of the heroically died soldiers of the 6th company of the 104th Airborne Regiment.

The tournament also had a patriotic orientation to the young people, who witnessed firsthandthe Russian warrior heroeswho really need to be emulated, whom they strive to be like.